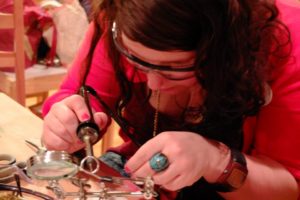 Last Thursday, with our rebuilt Ultimaker and several boxes full of tools, glue guns, and soldering tools, Raphael and I were ready to be handy people for the evening. We were heading to Coop Le Milieu by their invitation to co-host their March repair café. Repair Cafés and Fab Labs have a long history together and very naturally too! The first Repair Café was started in the Netherlands as a free gathering where people can come together and share tools and help each other fix their broken household appliances and clothing and furniture. Now several Fab Labs around the world hold regular Repair Café nights for the community and we were about to do our first. 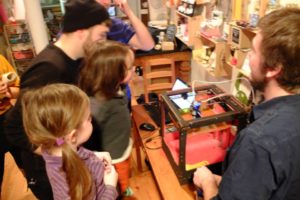 By six o’ clock, the café was full of people! A group with several adults and children were gathered around the 3D printer, fascinated as Raphael demonstrates how it works by printing the bottom piece of a GPS holder for an attendee to use with his GPS system. On the other table, we were tackling a set of speakers that a cat had chewed the wires of, and giving a second life to an electric vaporizer that had stopped working mysteriously. Later in the evening, a puppeteer came in to see if we can print joints for an old puppet and we found many possibilities online! 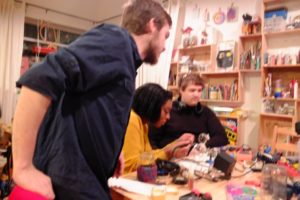 And it wasn’t just us being mechanics for the night. An amazing volunteer, Jason, came to help with the repairs and he had a backpack full of tools and supplies! It was lucky that he brought his full set of Windows and Linux install CDS because soon, a girl came with 3 broken laptops, and he was able to help her reinstall her systems. 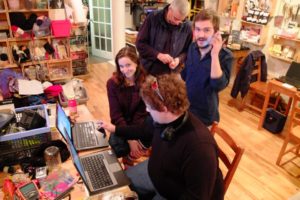 All in all, over ten different things brought in that day went from broken to usable again:   Speakers, headphones, electric vaporizer, a broach, several bracelets and necklaces, a laptop, camera lens cap, GPS holder, and slippers. 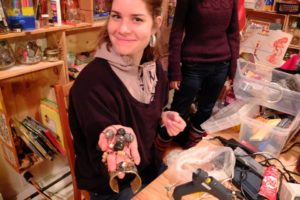 It was such a productive and creative night. Raphael and I miss working and helping people with their projects since our lab is temporarily closed and this was a really fun substitute! 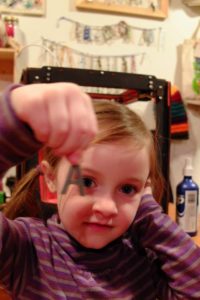